First off, please introduce yourself to our readers, where did you grow up, when did you start making art? 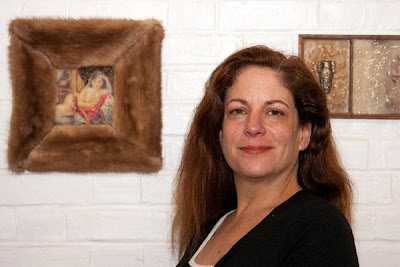 My name is Elise Mankes. I grew up in Brooklyn, and I’ve been making art since I can remember. My mom always hung my and my older sisters' drawings on the refrigerator and apartment walls. My Aunt Beverly (my mom’s sister) had gone to art school (Cooper Union). She was a big influence. She’d visit once a week and draw pictures for us, including drawing in our coloring books-outside the lines-oh yeah! That made a big impression on me.

In first grade I won third prize for a brotherhood drawing competition. I won one dollar. Mom cashed the check, and in my vague memory I bought a lot of penny candy. It really was a penny back then, oh yeah. It only took me another 40 years to receive another award for my art. Talk about your late bloomer…

From where did you receive your art training, and what kind of job(s) did you hold besides making art?

After high school I went to FIT (Fashion Institute of Technology) to study Fashion Illustration at the ripe old age of 16. It was a horrendous experience for me; it killed my love for drawing. I moved into ‘the city’ (Manhattan) and for the next ten years I waitressed, along with many memorable experiences of living in the big city in my 20’s. I’ll leave that up to your imagination…

I made attempts at ‘real’ (and not so real) jobs. Office/temp work (ugh), visual display at Macy’s and Bamberger’s, shoe model (yes, really… love those size 6 tootsies).

After starting my own costume jewelry company at the height of the 80’s craze, I took a metalsmithing class at the 92nd Street ‘Y’, and I realized that this was what I wanted to do.

I soon returned to school at SUNY New Paltz to get my BFA. After I graduated, I commuted between New Paltz and New York to work as a production manager for a small jewelry company, always intending to go to graduate school. After 2 years, I enrolled at UMass Dartmouth to get my MFA.

After three years of grad school, returning to the world outside of academia was not pretty. I once again tried my hand at many different jobs, finally coming to the realization (ok, I already knew this) that I was not cut out for the old 9-5 world. I decided to concentrate on my art. After all, I had turned my life around to return to school when most people are settling down. I was just getting started. What the hell was I thinking?

Would you share with our readers your art making process? What’s the inspiration behind your creations?

Objects with a previous history really intrigue me, perhaps because I have long had a sense that I exist in the wrong era… 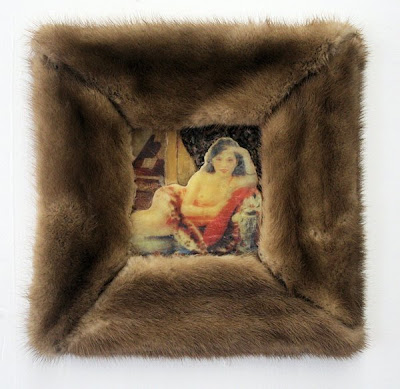 I became interested in post-mortem photography while taking a History of Photography class as an undergraduate student. This led to a fascination with memorial jewelry, and my interest continued to grow as I moved on to graduate school.

As happens so often in life, an ironic twist of fate occurred. While in graduate school, the man that I loved died, and I was left with a giant void in my life. After taking a leave of absence I returned to school, to find a way back into my work. Slowly I realized that I needed to memorialize him, and in turn I created a series of large-scale mixed media sculptures.

This is my favorite piece from the series of memorial sculptures I did in grad school. 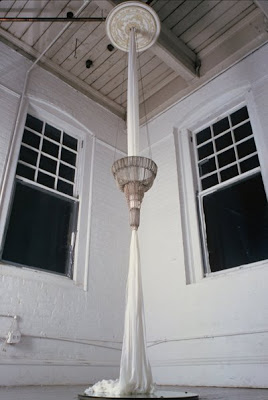 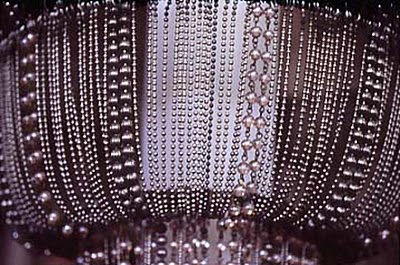 It was a huge transition for me in so many ways, including leaving behind small one-of-a-kind jewelry. From being oddly fascinated in all things post-mortem from a distance, to becoming entangled, drowning in that world as it became my life; the irony has never left me. The images, the objects, the aura of other-worldliness, the sensations carry through my work still, as I imagine it always will. 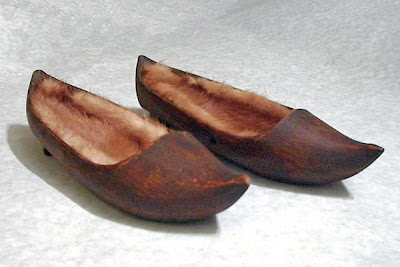 I am a collector. I love flea markets, yard sales, junk shops, dumpster diving. I love to pore through dirty, dingy old boxes­ – the best stuff is at the bottom. Always. Some of what I collect is just for me, but mostly I collect objects I am attracted to for my work. Some of these make it into my work fairly quickly – others stay with me for years. I will pick up something because I know that somewhere in the future I will want it, need it for a piece, and I won’t have to search the corners of the earth for it, it’ll be right in my studio. Somewhere in there. In a box under another box, in a bag. I think.

How does it all start, what techniques and materials do you use?

I like to surround myself with my ‘stuff’ – visuals stimulate my creative process – or whatever you want to call it. I look, touch, move things around, arrange and rearrange. I need to get in the zone. Distractions are a death knell.

I start with an idea, sometimes from an image, I work a lot with images: historical/ family/sometimes my own-or an object I am especially attracted to at the moment will inspire the image – it can go in either direction. One layer creates or informs the next­ – so while I may have started with an idea, usually a vague one, it never follows a preconceived path. It takes on a life of it’s own. I like it like that. It sometimes, more often than not, surprises me. I’m always learning something new – a new technique, way to see, whatever. And it’s never boring. I hate being bored.


I’m very particular about the materials I work with. I love textures, not only visually, but the way they feel in my hands. The different tactile qualities of the objects I use communicate from my fingertips through to whatever part of the brain it is that sparks my imagination, as if the textures have a language of their own. 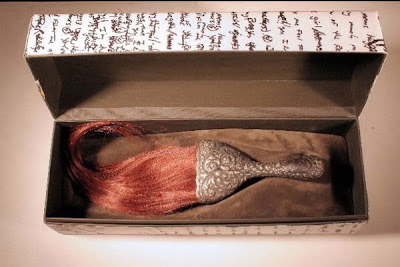 Various matter – the knottiness of hair and chain, the fragility of glass, the etherealness of feathers, the transposition of the seemingly incompatible, formed into a cohesive composition. Each material is formed according to its nature and the potential to be manipulated by my hand; photographs transposed, delicate paper pierced, rose petals and beeswax melded into one, wispy copper thread delicately wrapped and burned… 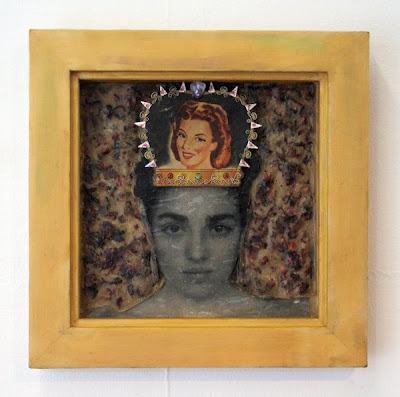 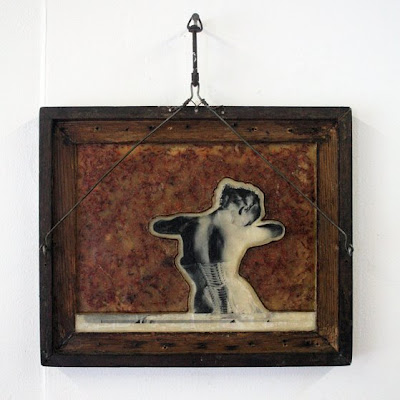 
I love working with my hands. Getting dirty, making a mess, my fingernails ground down, tips bloody… are a good sign that I am being productive.


I took this photo of a street performer in the French Quarter, N.O. in 2004. 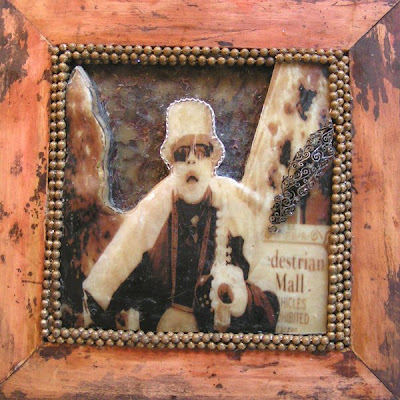 This was the first encaustic piece I did. Totally self taught, at this point by the way. 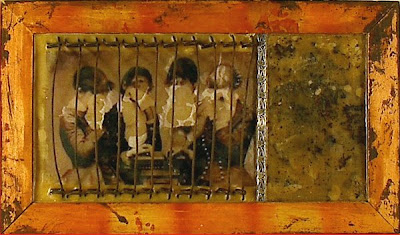 And encaustic. Melting the wax, the heat, (being a metalsmith, I am a natural pyromaniac) carving, mixing, tearing it away and starting all over. It is additive and reductive at the same time. The wax adds another dimension to the mixed media and collage work I love. The wax adds translucence; it creates layers and textures and a feeling of dimension and other worldliness.

That’s my parents and my sisters and myself. Guess which one is me…

You're a talented artist as well as a gallerist. Could you tell us a bit about your gallery, where it's located and how is it being operated?

I started a small studio in Rhode Island, and when I moved back to MA, I found a studio space that could also house a gallery, opening the ‘elise mankes studio’ in 2005. The gallery closed after a year, having something to do with the notorious ‘erotik neurotik’ show that stirred up the quiet little town of Marblehead. That’s another story… 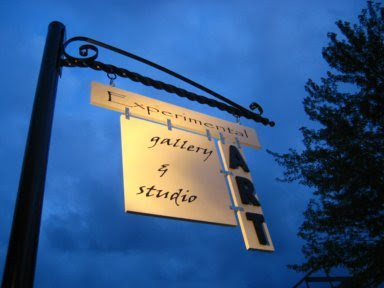 This year marks the third season of ‘Experimental Art Gallery & Studio’ a seasonal gallery that I run with friend, artist, and co-conspirator Sara Ashodian. It’s on Artists’ Row, in Salem, MA.

Besides sharing the duties of physically running the gallery, I handle the entire PR craziness and design all the graphic material for the gallery. We sponsor free outdoor musical performances all season, and the occasional class or workshop. We have a rotating show every month.

Tell us the exhibition programs you have planned for ‘Experimental Art Gallery & Studio’ this year. What are you working on besides running the gallery?

This year we are putting on 3 groups shows, (Small Works ’09, Alter-A-Tions, and SEE Scapes) Soul Tsunami, (our 2 person show) and in October, Tyson Schroeder. It will be his third year with us. We affectionately call him our October artist.

Last year we co-sponsored Mementos of Celebration with the Salem Arts Association, which was juried by Paula Richter/Curator of Textiles, Peabody Essex Museum. We will also be curating the next PEM companion show, which has been postponed to next year.

It’s a very busy 5 months, Memorial Day through Halloween, (I spend the rest of the year recuperating!) and in between all that entails, I try to squeeze in some work of my own.

Right now that is mainly encaustic mixed media-my passion, and I have recently done some collage-with the mixed media, sans the encaustic. I also still make some jewelry, although for a while I didn’t think I’d ever do it again.

What else do you do?

Like they say, in my free time… I am a member of LynnArts, Inc., and serve on the curatorial committee there. I am also a member of the Salem Arts Associations marketing committee, and am proud to be a founding member!’

Would you like to inform our readers of your upcoming events?

I will be showing my recent work in a two-person show with Sara Ashodian at the Experimental Art Gallery & Studio from September 4 –October 4, 2009. Exhibition title is 'Soul Tsunami'. Opening reception has been scheduled for Saturday, September 12, 4-7 p.m. You're cordially invited!

Please mark your calendar - for readers who are interested in attending art events to be held at Experimental Art Gallery & Studio:

Are you available for commissioned works?

Yes. I am available for commissioned work, in any medium, including jewelry. Please contact me ehmankes@gmail.com.