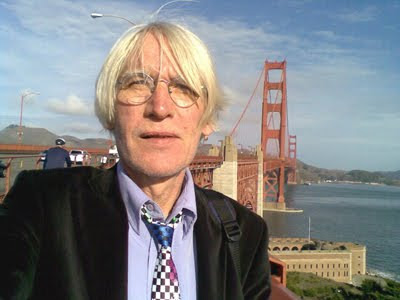 My name is Roland Orépük. I am currently living and working in St. Martin d'Heres near Grenoble in France. I was born to a Polish father and German mother on July 23, 1950 in Briançon, France. Briancon is 63 km away from Les Deux Alpes, and at an altitude of 1350 meters, is the highest city in Europe.

Shortly after primary school, I found work as a metal framer. It was intensively hard physical work in the construction sector. I enrolled in evening courses to become a draftsman. Four years later, I left the building to work as a designer in a engineering, consulting and construction firm. During that period, I had the privilege to study printmaking with Professor François Estebe at the Ecole des Beaux-Arts (School of Fine Arts) of Grenoble as a free student for two years. Professor Estebe is a great artist, he etched in a very classic way of Pieter Brueghel. I learned much from him.

I soon became bored with the drafting work, and pursued a new career as a cartoonist. I produced cartoon drawings for various weekly magazines, such as Open City, Hebdo, Ink Free Promotion, and Graphic Arts Liege in the 1970's. Again boredom took over and I found myself without the passion for cartooning. I realized that I needed a new challenge and life goals. I headed to the visual arts. After the shock of discovering artist Malevich, I finally knew what I wanted to do with my creativity. Making art for art sake, as theorized by Ad Reinhardt: “Art is Art. Everything else is everything else.”

From the 1980's, I started to increase the exposure of my creative outputs. I challenged myself to be highly productive artistically while working as a freelance graphic designer to support my family, my wife and two children. Today, I continue to tirelessly make art. The journey was long, but I finally knew what I was truly passionate about, and what I should be doing in life. 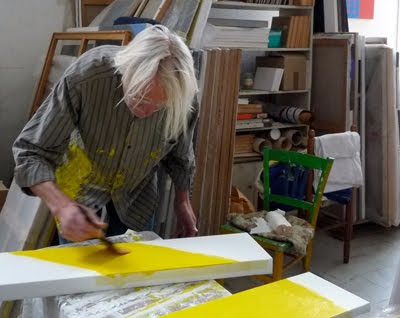 Roland Orépük in his workshop.
I have been using yellow, white and black in a minimal, abstract and geometric fashion in my work since 2000. As the work series began evolving, I use yellow and white exclusively in my work beginning in 2004. 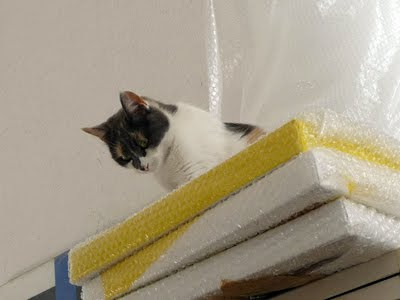 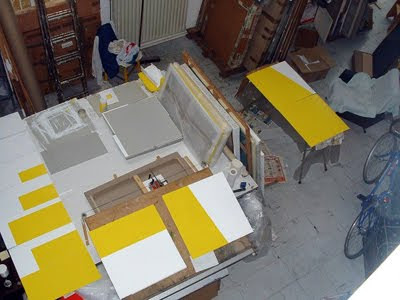 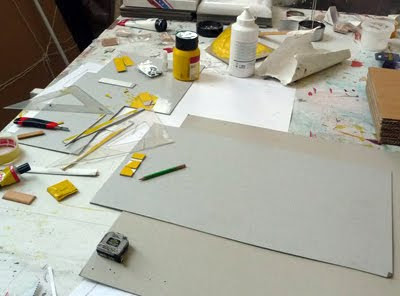 My influences are Malevich, the French group Supports/Surfaces, the Italian Arte Povera, and of course Minimalism. But my concept of reductive is more European than American. 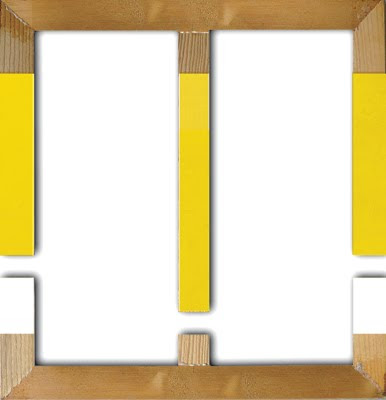 Below are images and translated texts about my work series ‘Monochrome inscrit’ in French, or 'Engraved Monochrome' in English. These texts resonate deeply in me, so I have had them translated into English to share with your English-speaking readers. The original French texts can be found on my website. Here we go: 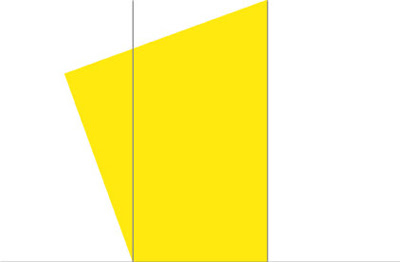 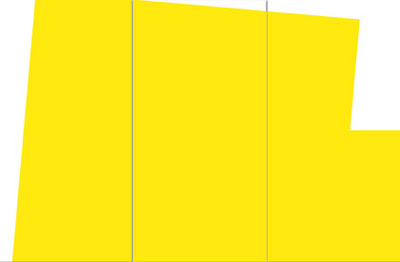 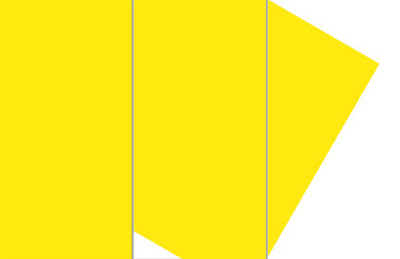 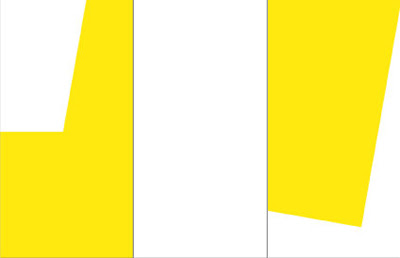 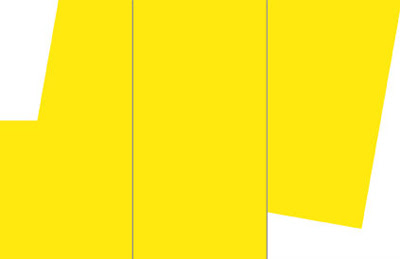 The forms of the yellow monochrome are no longer under tension as the yellow and black geometric figures were at the exhibition in Portugal.

The yellow monochrome seeks balance and harmony with the white wall, the canvas and the surrounding space. The combination: background, outline, figure, white wall and "yellow paintings" create confusion.

What the artist calls "engraved monochrome" is no longer on the canvas and appears striking in a place where the wall becomes the background and the medium of the painting. 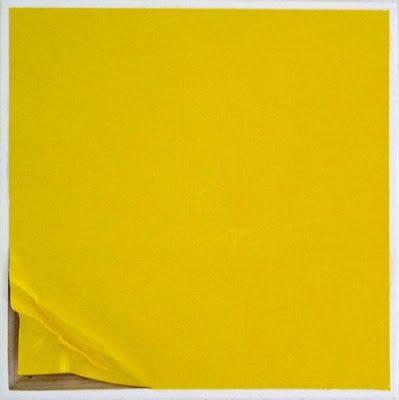 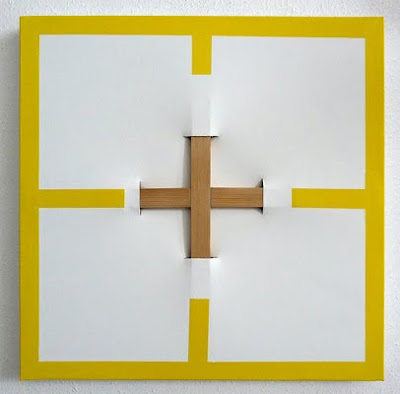 The below are two more translated texts about my work that I would like to share with your readers. Again, the original French texts can be found on my website.


What is to be done?

Art is submerged in a society which is going adrift.
Is it thus condemned to theorizing on the insignificant,
to magnifying some Mickey Mouse or Pokémon desultory icons?
For they are but glib images that generate nothing – no movement, no rebellion, no dream.
To assert that something exists, shall we show its emptiness or give it meaning?

Roland Orépük has made his choice.
Yet has he really made one? Simplicity has imposed itself.
Just a line, a surface. Balance, unbalance. Spatial landmarks.
Facing this, the observer must find himself, must exist.
Yellow, white – colour or light?
The yellow is brighter than the white of the wall; the white of the panel is brighter than the yellow.

The wall has received a trace.
While it was being looked at – for one minute or for a few days.
Then it will recover its silence.
No illusory meanings, no deceptive appearances in this work.
Just the essentials: real sense. A direction.

We are not asked to linger on our wistful past nor to project ourselves into a hypothetical future.
Before us is the essential shape and the vibration of light – or a transient ray of sunlight?
Just the present moment. Just life. 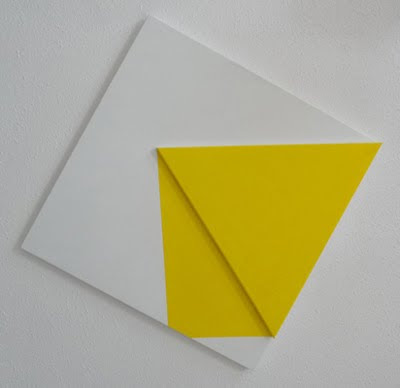 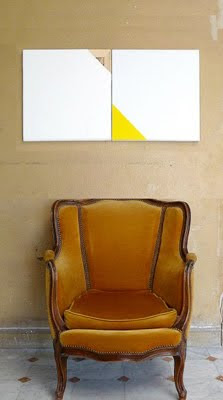 I am a member of the New Realities in Paris since 1989. I curate exhibitions in the Grenoble area, and I have shown my work at Factory49 in Sydney, Australia; CCNOA in Brussels, Belgium, and ParisCONCRET in Paris, France. 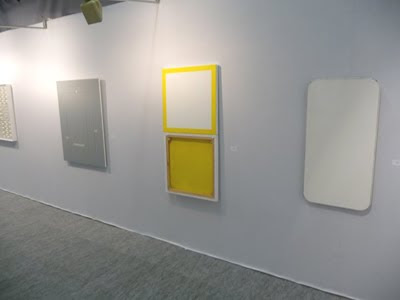 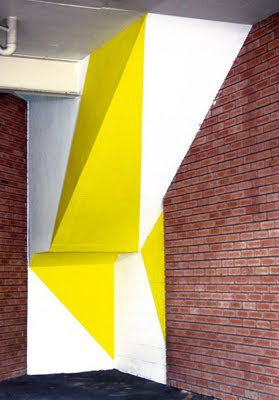 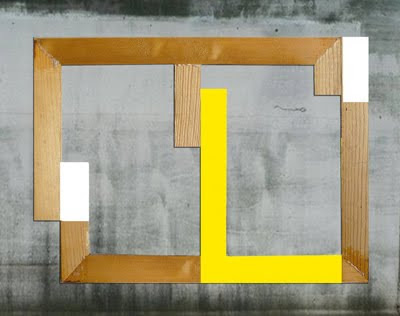 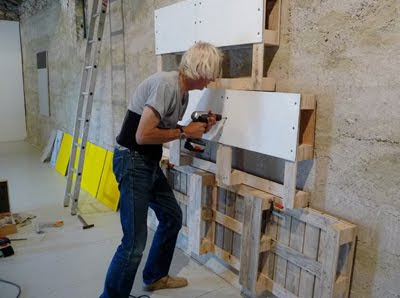 I also have videos made of my artwork posted on YouTube.