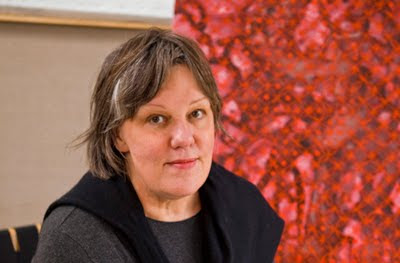 My name is Susan Buret. I was born in Brisbane, a sub-tropical city on the east coast of Australia and lived most of my life there. Eighteen months ago I moved to Burrawang, a small village about two hours from Sydney in the Southern Highlands of New South Wales, where I have a large garden and my first purpose built studio.

I always wanted to be an artist but my parents discouraged me from attending Art College. I graduated from the University of Queensland with Bachelor of Arts majoring in Art History and Psychology in 1972. I quickly realised that I didn’t want to be a psychologist and in 1977 opened a restaurant with two friends. The restaurant was in the same building as Ray Hughes Gallery, Brisbane’s leading commercial contemporary gallery at the time, so I was able to spend lots of time looking at wonderful art and hanging out with artists.

I stayed in the restaurant industry for 25 years often in businesses located close to galleries. In the late nineties my partner encouraged me to draw again and when I sold my last restaurant in 2002 I decided that I wanted to make my arts practice my full time occupation. I now spend my time in the studio or in the garden.

Please tell us about your work in general. What media do you work in? What are the inspirations behind the creation of your work series, and what is the specific message you want to convey to your viewers? 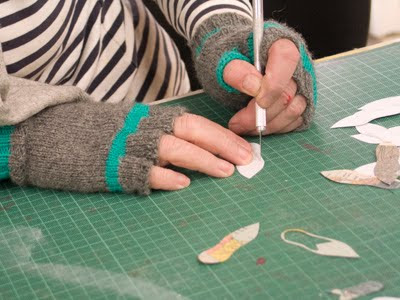 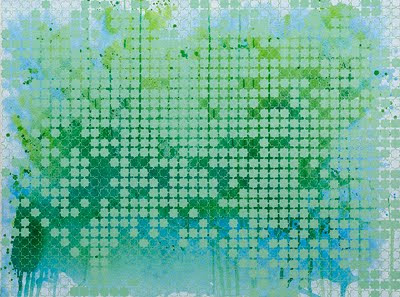 I paint and work with collage. I always dreamed of making beautiful spare, non-figurative, reductive works but that is not how things worked out! Since my childhood I have been fascinated by pattern and geometry. Mathematics was always my favourite subject and I can remember spending hours looking at the patterns on curtains and carpets whenever I went somewhere new. My house is filled with oriental rugs and I am an uncontrolled collector of patterned china. So much for the dream of minimalism. 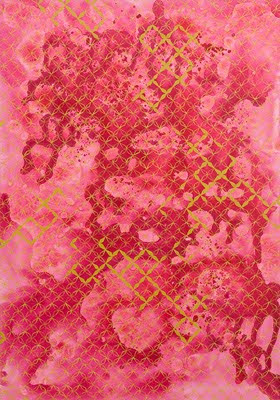 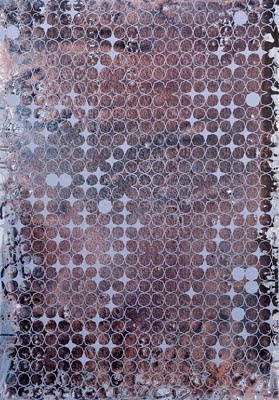 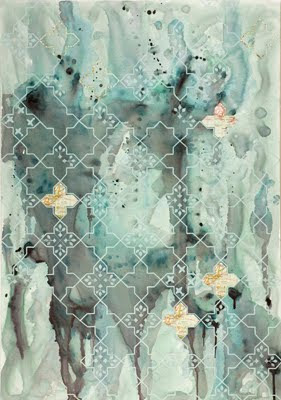 Having enjoyed an affluent, safe and idyllic life in Australia, I am moved by the media reports of those whose lives are affected by war, violence and poverty and their treatment when they seek a new life. My earlier works used shredded copies of passports and visas and I now cut patterns and shapes from maps and include them in my works. Despite dealing with these confronting issues my works often look like the beautiful patterns and textiles we use to decorate our homes. I hope that they might quietly lead the viewer think about the plight of the displaced. 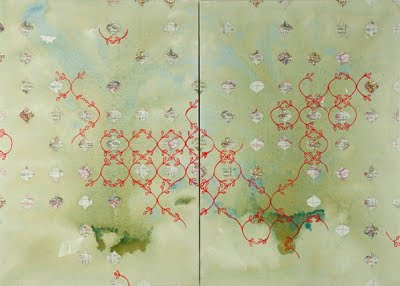 ‘ - breaking up all the ordered surfaces and all the planes with which we are accustomed to tame the wild profusion of existing things, and continuing long afterwards to disturb and threaten with collapse our age-old distinction between the Same and the Other’

From ‘The Order of Things’ by Michel Foucault.

Are you currently showing your work? 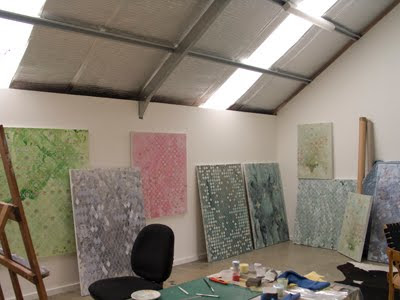 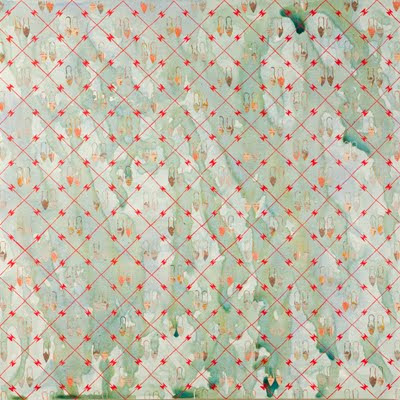 Stolen geometry from the gardens of love

‘There is geometry in the humming of the strings, there is music in the spacing of the spheres.’

For several years my work has been concerned with issues of identity, documentation and displacement, with pattern and geometry being it’s the primary visual focus.
There is a universality of pattern applied cross-culturally to both public and private space to personalise, provide human scale and divide the immense into measurable portions.

Inspired by the patterns in oriental carpets, screens, textiles, mosaics and gardens, the works in this exhibition are an examination of inclusion and exclusion, the use of pattern for mapping and delineating ownership either by drawing a border or applying personal decoration to signify that the space is one’s own.

As I don’t currently have representation in Sydney, my Melbourne Gallery, Anita Traverso Gallery, is presenting the exhibition which runs from 7 to 18 December 2010 with the opening from 4-6pm on Saturday 11 December. I will also be opening my studio as part of the local Southern Highlands Art Studio Trail on 20 & 21 November from 10am to 4pm.

Please tell us about the awards and recognitions you received in the past years.

I currently have one work shortlisted for the Redland Art Award and in the short time that I have been working fulltime at my arts practice I have been fortunate to win a couple of major Australian art awards and to show my work in Australia and in the United States. I have also had artist’s residencies at Bundanon in Australia and at the Ragdale Foundation near Chicago. 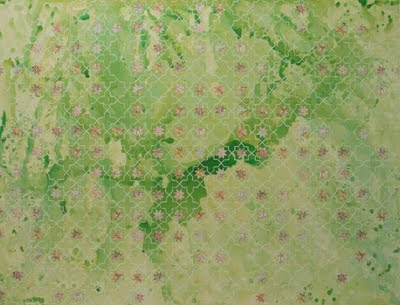 Are you represented by any gallery? Are you planning any exhibitions of your work in the near future? 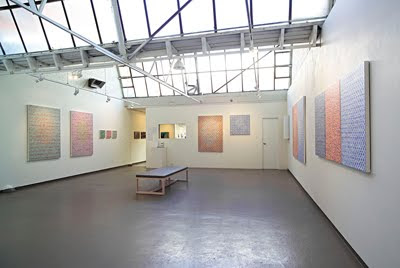 I am currently represented by Anita Traverso Gallery in Melbourne, Australia and have shown my work in major cities and regional galleries in Australia and in North Carolina in the US. I would love the opportunity to show my work internationally and participate in curated group exhibitions. 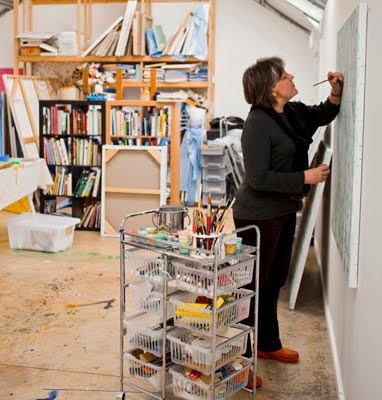 Artist at work in her studio. Photo: Susan Buret
Your readers are welcome to contact me at sburet@bigpond.com

What advice would you give to an artist just starting out?

My advice to an artist just starting out would be to go for it! Be true to yourself and make the work you want to. Fear of failure will only hold you back and, a bruised ego quickly heals. 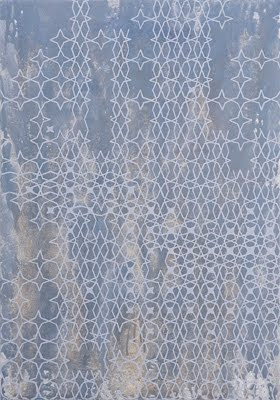 Finally, is there anything else you would like to say about your work?

Susan Buret is a cunning conjurer. From a distance her delicate pastel-coloured collage paintings present as fragile decorative friezes. Intricate patterns compose rippling rhythms and one thinks of Moroccan evenings. Then, standing closer, you realize the backgrounds are composed of shredded photocopied visas while repeated stamps of suitcases, razor wire and bomber aircraft form a surface mesh. What was pretty suddenly flips into poisonous commentary on international border protection and refugee camps. Almost subliminally, in the centre of each image, the fainted shudder of a silhouette hovers. These are the ghosts of the stateless returning to haunt us. 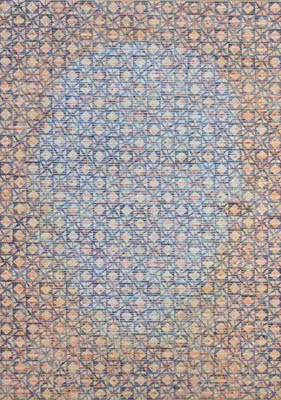 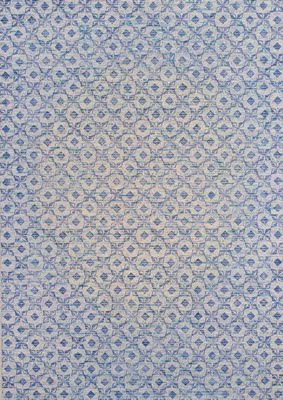 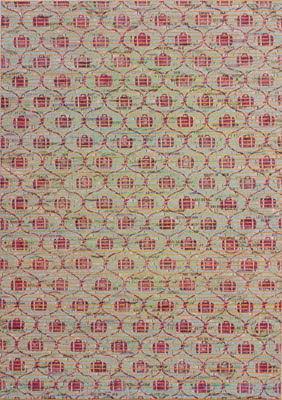 In 2006, judge Hossein Valamanesh announced Brisbane based artist Susan BURET as the winner of the 2006 Conrad Jupiters Art Prize with her work Date de Naissence, shredded passport, synthetic polymer paint, ink on canvas. Of the work he said, "I was first attracted to the simplicity and quietness but as I came closer I became aware of its intricate layering and, how beyond that quietness, it was coming with a very powerful message. The patterns which overlay the whole work remind you of a security fence and also of the patterning on a Palestinian scarf - I suppose what I like is that the political message is strong but so subtly expressed - the glow in the middle to me stands for a face - it is like it is a face glowing from the middle of the work."

Note: The Conrad Jupiters Art Prize is an annual acquisitive exhibition run by the Gold Coast City Art Gallery in the city of the Gold Coast, Queensland, Australia. One of Australia's oldest art prizes, it began in 1968. 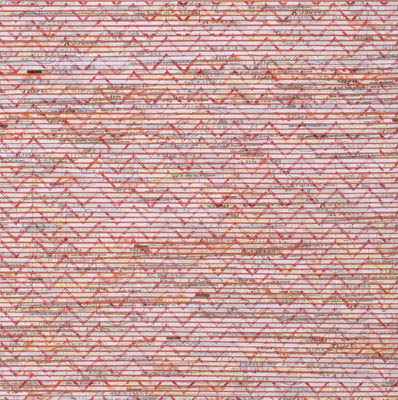 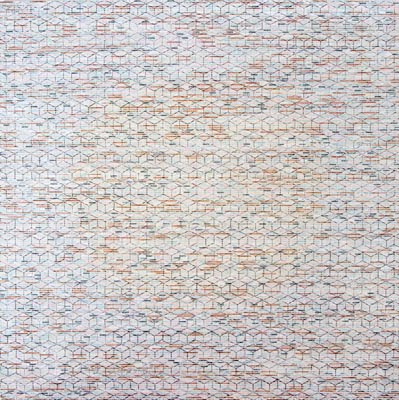 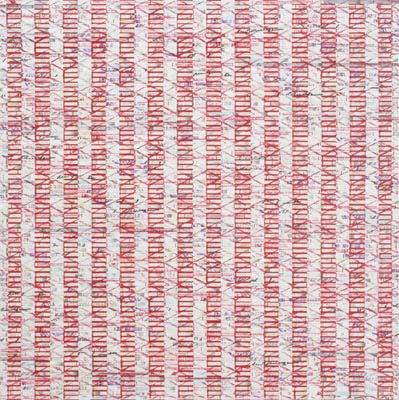