First of all, please introduce yourself to our readers that might not be familiar with you and your work. 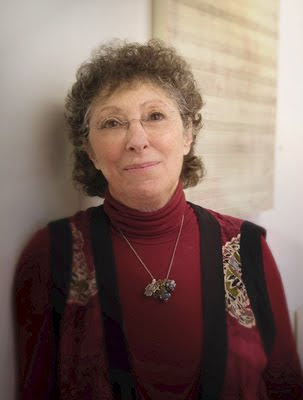 My name is Susan Schwalb and I was born in New York City where I have spent most of my life. I graduated from the High School of Music and Art and received a BFA from Carnegie Mellon University in Pittsburgh, PA. I majored in design and painting as well as took a lot of printmaking courses.


When and how did you get interested in art making? Currently, what type of job(s) you do besides making art? Do you teach, write and/or curate art exhibits?

I wanted to become an artist since I was five years old, even though at that time I of course had no idea exactly what an artist did. My mother was a semi-professional artist who worked in ceramics, jewelry and painting. She also taught art in the public schools. As a child I was taken to museums all the time and considered the Metropolitan Museum of Art my playground. I especially loved the Egyptian wing.

After art school I worked as a freelance graphic designer primarily in book publishing doing book covers and book design. I also had some small advertising clients, working on ads, logos and other projects including an off beat group called Groove Tube (a video/theater group who had shows in small theaters- Chevy Chase was the main actor before his major career began). Eventually I began to teach graphic design first at Kean College in Union, New Jersey, then at the City College of New York, and finally at Massachusetts College of Art and Design in Boston, Massachusetts.

Currently I support myself as an artist. I have written features and book reviews for Women Artists News, Art New England and Artscope. I recently co-curated a show at the Kentler International Drawing Space in Brooklyn, New York entitled, “Silverpoint Revisited: An Ancient Technique for the 21st Century”.


Please tell us a bit about your work in general. What media do you work in, and what are the inspirations behind the creation of your work? Would you like to discuss a bit your creative process? 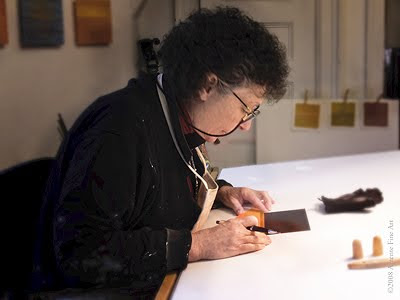 For the past thirty years I have been part of the revival of silverpoint drawing in America and am considered by many to be one of the foremost figures. Most contemporary artists who draw with a metal stylus continue the tradition of Leonardo and Dürer by using the soft, delicate line for figurative imagery. My work, on the other hand, is resolutely abstract, and my handling of the technique has been very varied and innovative. In works from the 1970’s I tore and burned paper to provide an emotionally free and dramatic contrast to the precise linearity of silverpoint. In works from the 1980’s I combined silverpoint with flat expanses of acrylic paint or gold leaf. At times I have used a wide variety of metals so that subtle shifts of tone and color would emerge. Finally, in 1996, I began what many think of as signature works, as I abandoned the stylus altogether in favor of wide metal bands to achieve a shimmering atmosphere reminiscent of the luminous transparency of watercolor. 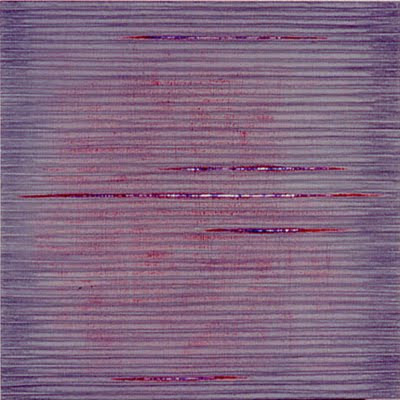 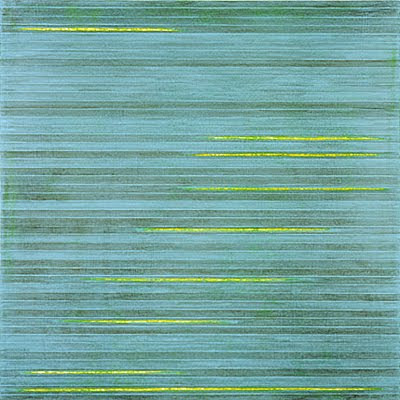 Starting in 1997 when I expanded my technique of drawing with pieces of metal by mounting paper on wood (although after several years I stopped gluing paper onto the wood) then using metals as well as acrylic paint to create a series of works that fuse drawing and painting. The images seem to float on the wall creating what appears to be a 3 ­dimensional undulating surface. Gradually I added more color and distinct bands of tone emerged. I began to apply layers of paint, usually using several colors, then I erased part of the surface with sandpaper to expose the paint. Often I add additional paint and drawing to intensify the layered effect. Light seems to emerge from somewhere in the interior of the panels. The groups of horizontal bands are carefully (but intuitively) measured. 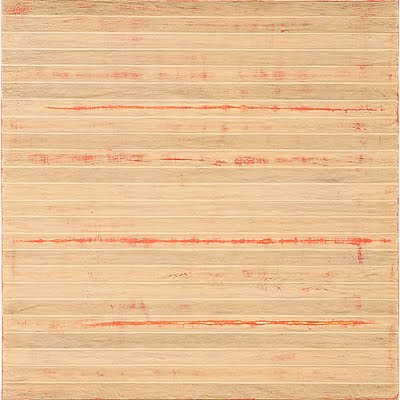 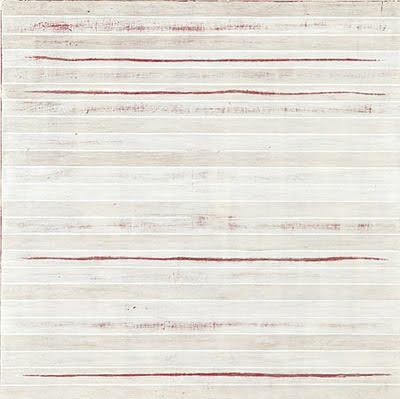 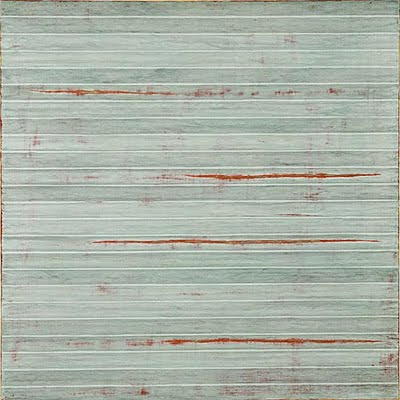 Memories of light have been a recurrent source for recent work, and travels to Arizona and New Mexico suggested some of the colors and shapes in my “Afterimage” series that was shown in Chelsea in 2003 at Robert Steele Gallery. Other works responded to the light on the Hudson River as I saw it from a studio I used to have on the West Side of Manhattan. More recently, the atmosphere has become subtler; no event (such as a horizon line) is allowed to become the focus. Instead, the eye is invited to wander across the surface, comparing and contrasting. It seemed to me that a sense of the passage of time had become central to these works, and so I thought constantly of music, but a subtle music, or to adapt Mallarmé’s phrase, a “music of silence”. These works were shown in solo shows at Galerie Mourlot, NYC in 2008 and Simon Gallery, NJ in 2009. My most recent body of paintings and drawings (2009-2011) were also inspired by memories of light. Rising early, almost with the sun, during a month-long residency at Virginia Center for the Creative Arts, I watched the dawn shimmering through the trees outside my window. The filtered light of a mist or fog, often present in the early morning hours, became an essential source as pinks and yellows found their way into my paintings. 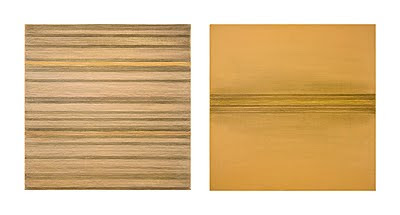 Tone and line are the most important features of these works. I began by carving thin lines into the surface of my wood panels after which I applied several layers of paint. Then, after sanding the surface to create the ghost-like forms that emerge from the color underneath, I enriched the surface with bronze tones and metalpoint drawing. In some works like the diptych “A Sudden Stillness” a general uniformity in tone and design allows subtle differences to play off one another. 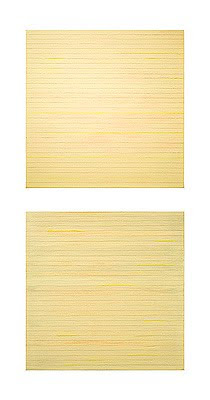 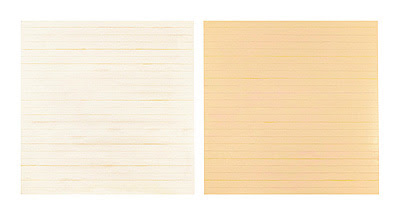 In “Toccata”, on the other hand, a large yellow surface with contrasting pink highlights is covered with carved lines and metalpoint drawing so that it seems to vibrate as the eye moves around the painting. 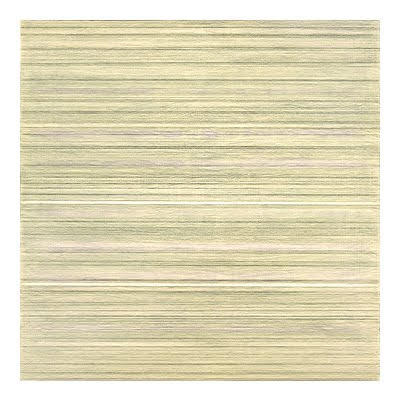 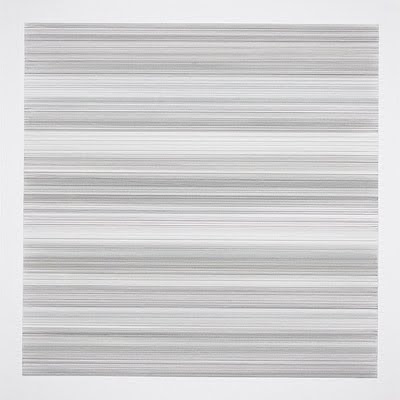 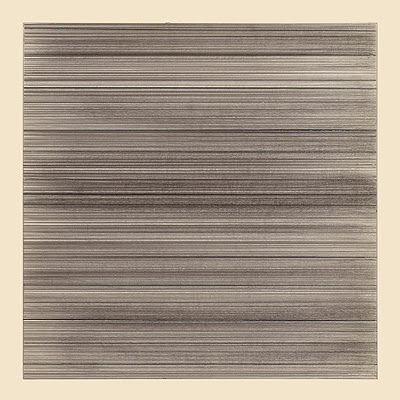 In some of the latest paintings black gesso has been used over a painted colored surface and these paintings are entitled “Interlunar Vibrations”. 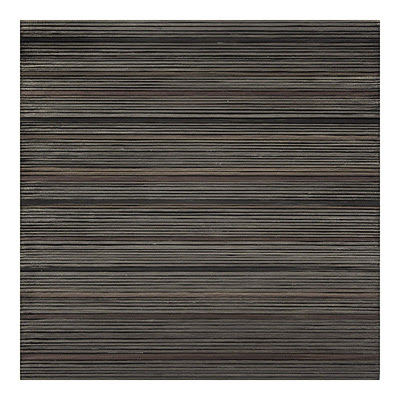 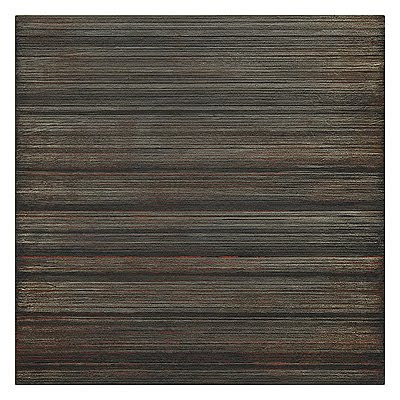 “The Paintings (and the few drawings) in this intimate exhibition were rich with lovely contradictions. Each work, while dense and busy, was also a study in precision and balance, celebrating the artistic accidents and interventions of the human hand. Magically, despite their apparent strict mathematical underpinnings, the works conveyed an unexpected sense of emotion….. Layer upon layer of color in intriguing combinations give the paintings an ethereal glow; even a small black painting, Interlunar Vibrations II (2010), appeared luminescent here.” 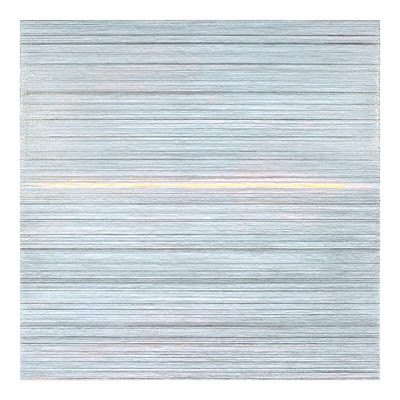 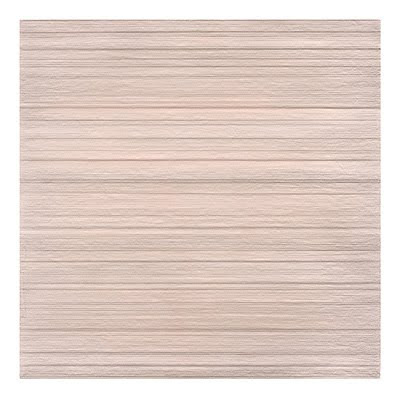 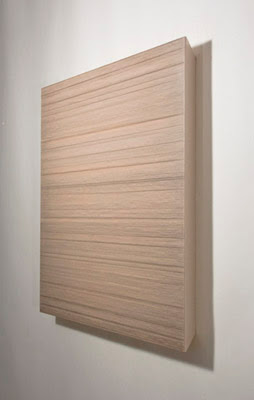 
Many of the drawings, particularly those entitled “Madrigal”, create a counterpoint between fine lines drawn with a stylus and broad swatches of bronze or copper tone. Those entitled “Toccata” have a stronger linear presence, and on occasion I have actually used fine pencil lines as a dark black contrast to the metalpoint. 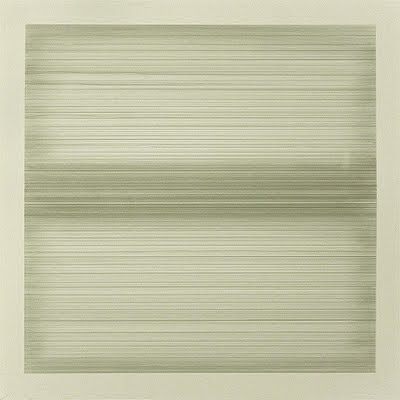 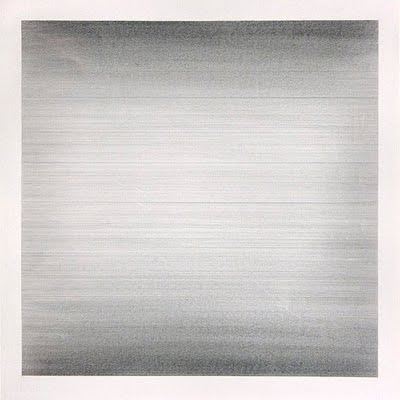 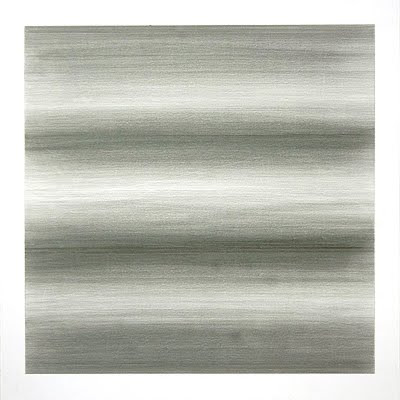 In the drawings entitled “Aurora” I have used black gesso as my ground continuing the use of fine lines and broad strokes of copper or bronze. The ground changes all the tones and colors of the metals and the works seem to have an iridescent glow. 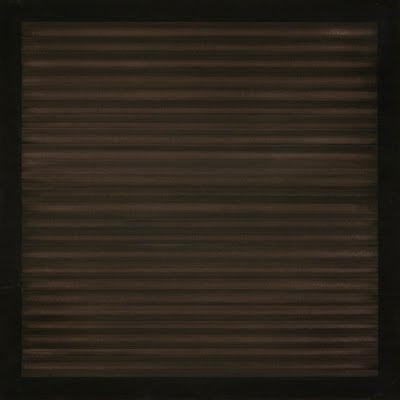 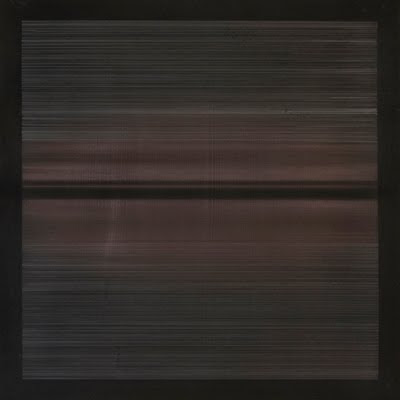 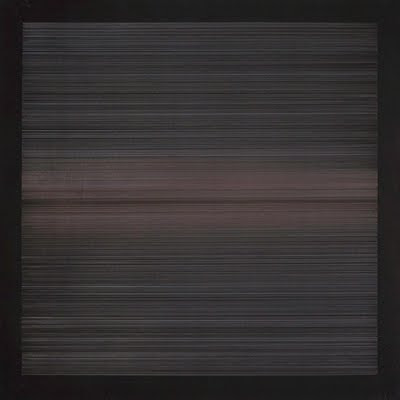 
Are you currently showing your work? Are you planning any exhibitions of your work in the near future?

This fall I will participate in two unusual shows- “Plain”, an artist book show, curated by Dr. Guy Morag Tzepelewitz at a new non-profit art gallery and arts center in Gymnasia Herzlia, Tel Aviv, Isreal and “Drawing Connections” a postcard show at the Siena Art Institute, Italy. In both cases I have made unique works for each exhibition. I am in negotiations for a possible solo show in San Francisco.

Do you have website(s) for interested readers to learn more about your work? Representing gallery if any? Are you available for commissioned works?

My website is www.susanschwalb.com and it lists my agents. I have done commissions on an occasional basis. Your readers may contact me at susan@susanschwalb.com.

Finally, is there anything else you would like to say about your work?

I recently was asked to write an autobiographical essay which might be of interest to your readers which covers some of my life in the feminist art movement. 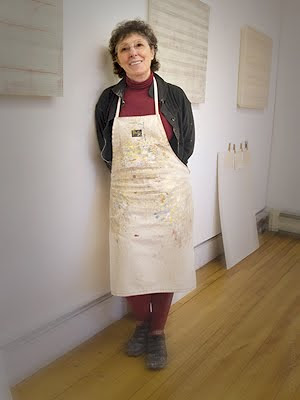